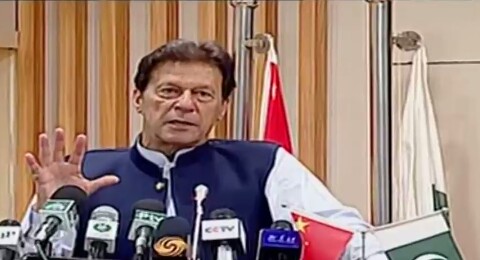 Talking to media in Gwadar, PM Imran Khan said that the situation in the region is very serious at present.
There is clear evidence of RAW involvement in the Lahore blast.
India is currently suffering the most. India has invested billions of dollars in Afghanistan.

Addressing a function in Gwadar, the Prime Minister said that the Gwadar project, which had lagged behind many areas in development works in the past, would take Balochistan to a new development destination.

The Prime Minister said that Pakistan was developing rapidly in the 60’s. At that time we were role models. Gwadar would benefit the whole of Pakistan including Balochistan. Pakistan is becoming a great country.

Prime Minister Imran Khan said that with the construction of International Airport, Gwadar will be directly connected to the world.
The One window operation is being launched to facilitate foreign investors. We have not paid any attention to exports. Went to IMF many times Pakistan has had to go to IMF 20 times so far.

In his address, the Prime Minister said that a zone of 2200 acres has been opened and investors have been invited.
Gwadar is the focal point of Pakistan. A 500-bed hospital is also under construction in Gwadar. A university is being set up in Gwadar.
A great program has been launched for the betterment of fishermen in Gwadar.
Subsidizing the construction of houses through microfinance.

According to details, a ceremony was held in the presence of Prime Minister Imran Khan to sign MoUs on the inauguration of development projects in Gwadar.

Addressing the inaugural function, Chinese Ambassador to Pakistan Nong Rong said that it was a great pleasure for him to attend the inauguration ceremony of Gwadar development projects.

The Chinese Ambassador termed the C-Pac projects as a guarantee of prosperity of the region including Pakistan and said that the relations between Pakistan and China were getting stronger and stronger.

Briefing on the visit of Prime Minister Imran Khan to Gwadar before the ceremony, the Chairman C-Pak Authority said that today they are going to make history by laying the foundation stone of the 2200 acre project.

Chairman C-Pac Authority Lieutenant General (retd) Asim Saleem Bajwa said that the journey of development of Gwadar city has started along with Gwadar Port. A modern hospital with 100 beds is being constructed in the city and at the same time International Airport is also being constructed. No, construction of Vocational Institute is also underway in Gwadar.