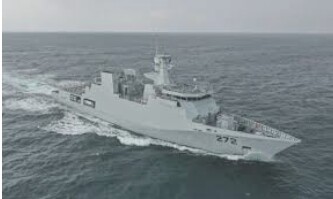 The spokesman said that the construction ceremony of the third state-of-the-art ship Frigate 054 in China was held at Hudong Zhongwa Shipyard.

Both ships will be equipped with modern technology, various military equipment and sensors. Addition of the ships to the fleet will further strengthen the country’s maritime defense. Ships will play an important role in maintaining the balance of power in the region.