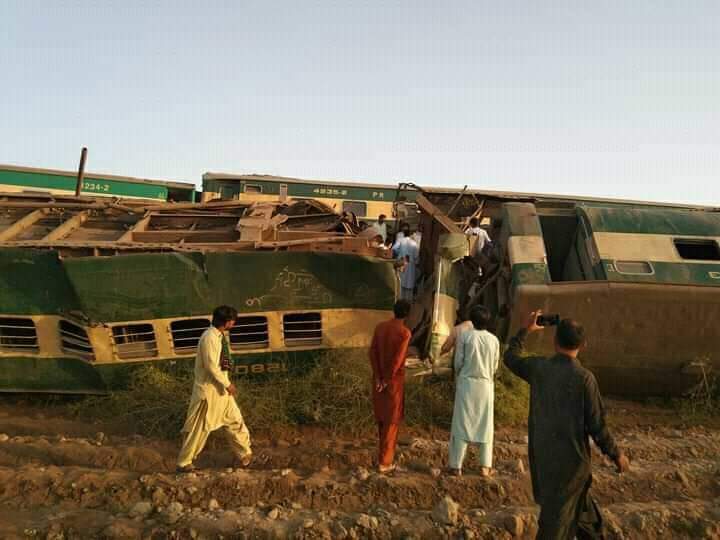 To said Sources that the accident took place near Daharki and Reti Lane stations in which 8 bogies of Millat Express and 3 bogies including engine of Sir Syed Express derailed.

Sources to said rescue operations were launched in the area a few hours after the accident was reported. The injured and dead have been shifted to Sadiqabad Daharki and Mirpur Mathelo hospitals where 50 deaths have been confirmed so far. More than 70 passengers were injured.

And several stranded passengers have been evacuated from heavy machinery. Rescue work is underway

Ghotki SSP said that a medical relief camp has been set up at the accident site and medical aid is being provided to the injured while providing all kinds of assistance to the affected passengers.

According to the officials, the passengers of the affected trains boarded the tractor-trolleys and left for the national highway.
DS Railway says the drivers and crew of both trains are safe.

On the other hand, Deputy Commissioner Ghotki Usman Abdullah said that 13 to 14 bogies have derailed in the accident and 8 bogies have been severely damaged. Many people are still trapped in the bogies due to late arrival of heavy machinery. The bodies have been exhumed using.

Railway authorities have formed a committee headed by a 21st grade officer to investigate the accident, while the railways has announced Rs 1.5 million each for the heirs of those killed in the accident. Depending on the nature, a minimum of Rs. 100,000 and a maximum of Rs. 300,000 will be provided.