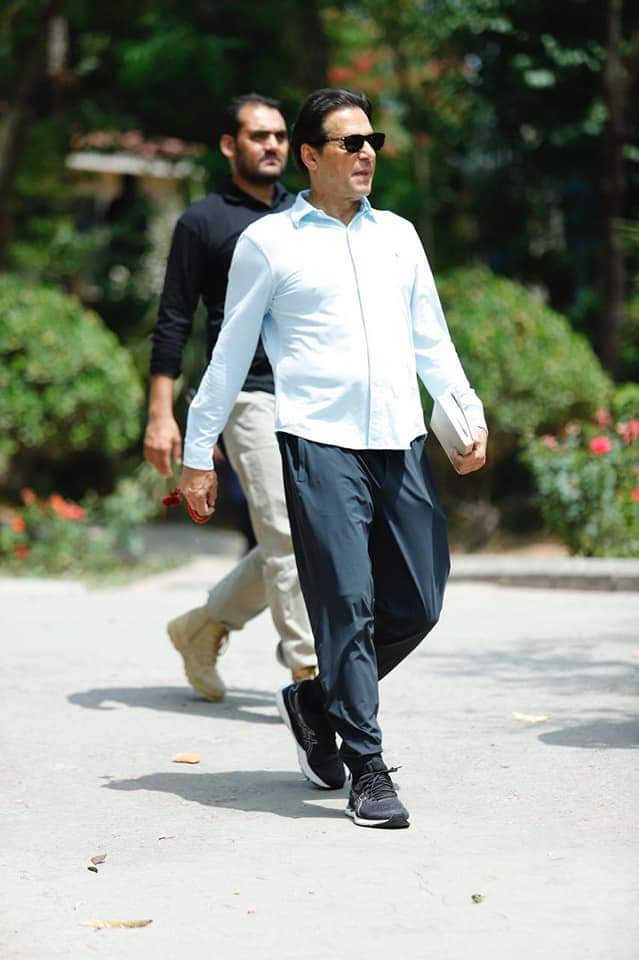 Chairman PTI Imran Khan said that the call for long march is being given because our country has been insulted and the most corrupt people have been imposed on us.

Imran Khan said that the message to all Pakistan is that all people should prepare now. The sea of people will gather in Islamabad. Our preparation will start from the moon night.

We have to tell the whole world that we are a living nation. The call of Long March is for all Pakistanis and not just PTI. Islamabad will be the largest gathering in the history of Pakistan.

Ex PM said that the people will say that no one will be able to impose corrupt tola from abroad in future and the decision of Pakistan will be taken by the people of Pakistan.

Imran Khan said that 60% of the people in the cabinet are on bail. There are 40 billion FIA and NAB corruption cases.

Despite the heat surge the inflow of water in the gutters is veritably low and water storehouse in Tarbela and Mangla heads has also been depleted.

Those in days last time the water storehouse in the heads was 3 million acre bases which moment has been reduced to only acre bases.

Water extremity is likely to negatively affect the cotton and sugarcane crops. Drinking water may also be depleted in southern Punjab and Sindh. 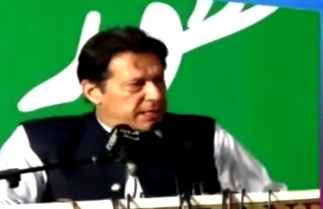 Addressing the Workers Convention in Multan, Chairman and former Prime Minister Imran Khan said that this mafia has been operating in two ways for 35 years now. A book was written against me by giving. Now these people will destroy my character after Eid.

Imran Khan said that Sharif Mafia threw fake pictures of Benazir and Nusrat Bhutto. The same mafia launched a campaign against this woman who came to Pakistan as a Muslim and became a Jew.

He said that a gang of thieves was imposed along with Mir Jaffer and Mir Sadiq. Shahbaz Sharif was imposed because it never goes against the interest of outside forces. 400 drone strikes were carried out. He said that we have to thwart this conspiracy and hold elections in the country. He said that the people should decide who should govern the country.

The PTI chief said that Shahbaz Sharif is the man who has 40 billion corruption cases against him. Imposing the thief mafia is an insult to our 22 crore people. I will tell the nation how many cases there are and how much money they have stolen.

The former Prime Minister further said that Islamabad March must be successful. My call for Islamabad will decide the future of the country whether to remain free or become a slave. This will be the most important movement for real freedom in 75 years. Workers have to prepare South Punjab for Islamabad. I challenge the sea of ​​3 million people to come to Islamabad on my call.

The former prime minister said that one war is fought with weapons and the other with language. We will fight against this mafia with our own language and prepare the people, especially the lawyers. ۔ 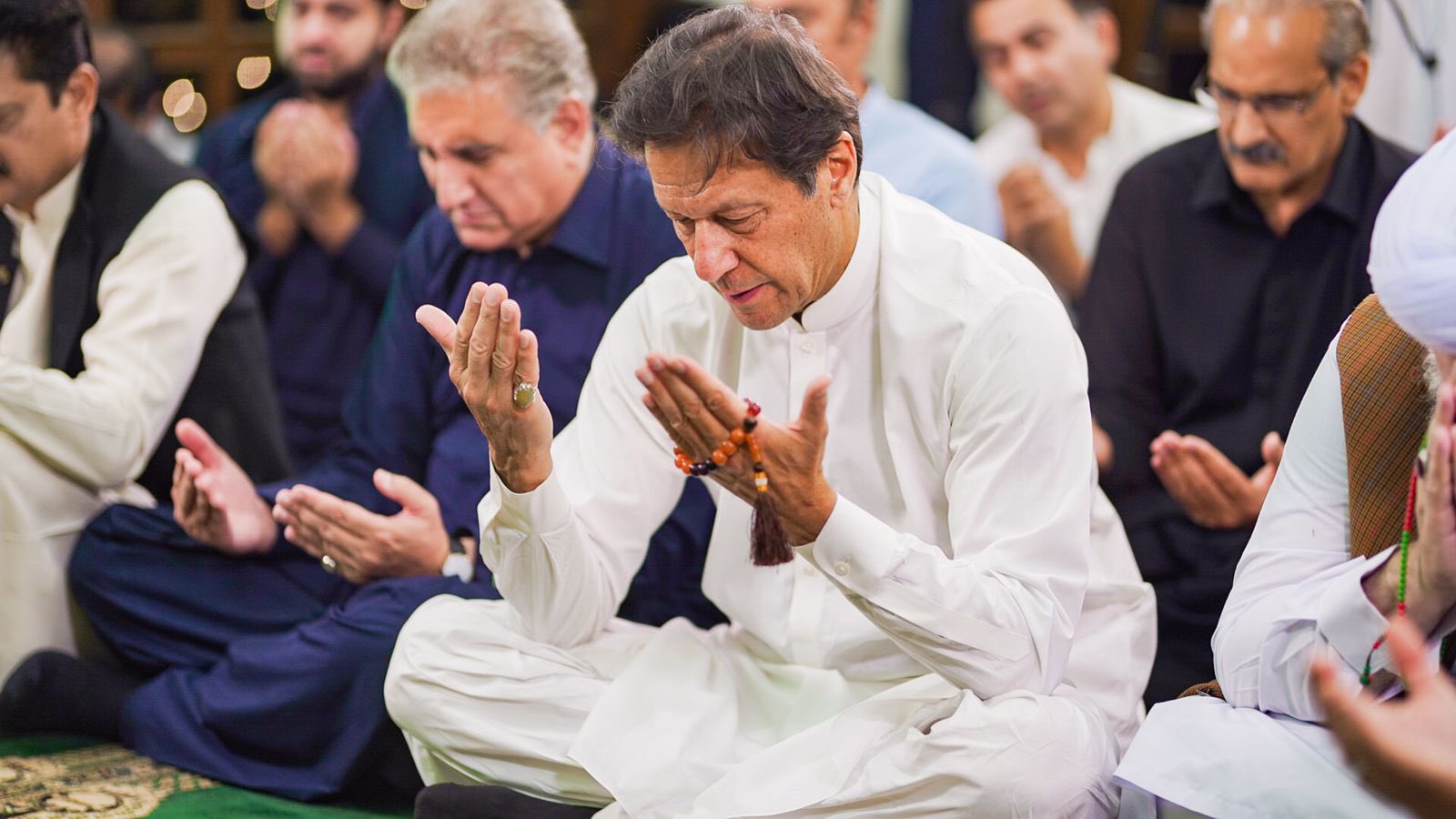 The special prayer ceremony was named as Shab-e-Dua, during which former Prime Minister Imran Khan said that the nation should pray today that we may break the chains of our freedom and fly like Iqbal’s Shaheen.

He said that Pakistan came into being on the night of the 27th night. Pakistan means La ilaha illa Allah that this country was built with this slogan. Do not understand the meaning of the chains will not break.

Ex PM said that Allah Almighty has commanded us to follow in the footsteps of Prophet Muhammad (peace be upon him). The fear of bowing is gone.

He said that the nation should pray for the removal of obstacles in the way of its freedom tonight. Will give

During the ceremony, Maulana Tariq Jameel described the virtues of Shab-e-Qadr and offered special prayers on the occasion of the holy night which filled the eyes of the participants.

He said that he had come to this country to pray for the country and not for any political purpose.

Maulana Tariq Jameel said that begging from people is humiliation and asking from Allah is pride. If Allah is pleased then there is no gift more beautiful than death Allah is angry then destruction is destruction

Maulana in his speech said that I request everyone to create sweetness in their language. Even the Prophet did not like the intensity of language at all.

The night prayer service in Bani Gala was shown with the help of screens in major cities of the country. 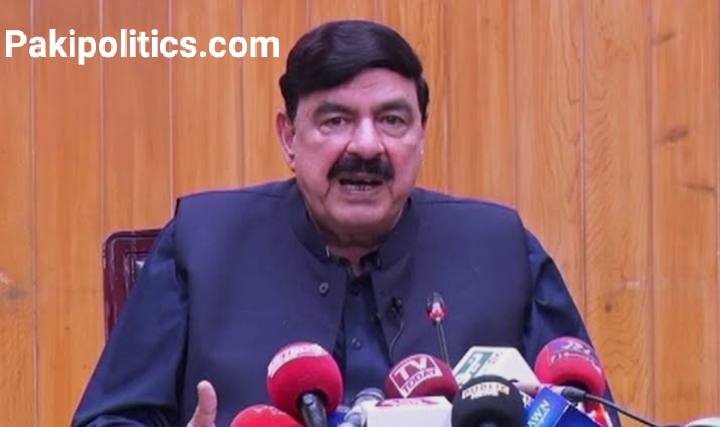 Addressing a press conference in Peshawar, the Awami Muslim League chief said that it was an imperialist government. They did not attend each other’s funerals. He said that the person who is about to be charged should become the Prime Minister.

Sheikh Rashid said that he demanded that the date of elections be given before May. He said that early elections should be held in this country. Awami Muslim League will participate in Imran Khan’s long march. Nawaz Sharif also got passport Imran Khan has reminded the whole of Pakistan of Maqsood Chapdasi.

We are fully prepared for Imran Khan’s call. It is just a government of two votes and conspiracy. We have also made mistakes. This country is about to be swept away. More than half of the ministers of the present government are guilty.

He said that democracy will end in the country. Everyone will come together on Imran Khan’s call. Election date should be given before May 31. We tell him that this is a sectarian government. The nation has stamped that it will not recognize Nawaz Sharif. This government has been brought in by a global conspiracy.

Sheikh Rashid further said that these people will not say anything to the media cash group, they will kill whoever is standing in front of them, they will harass them.

The people have stood up. It will be known that there is a country whose prime minister is asking for a date for the crime. Corruption is in their blood. No matter what kind of system comes, it will not happen. 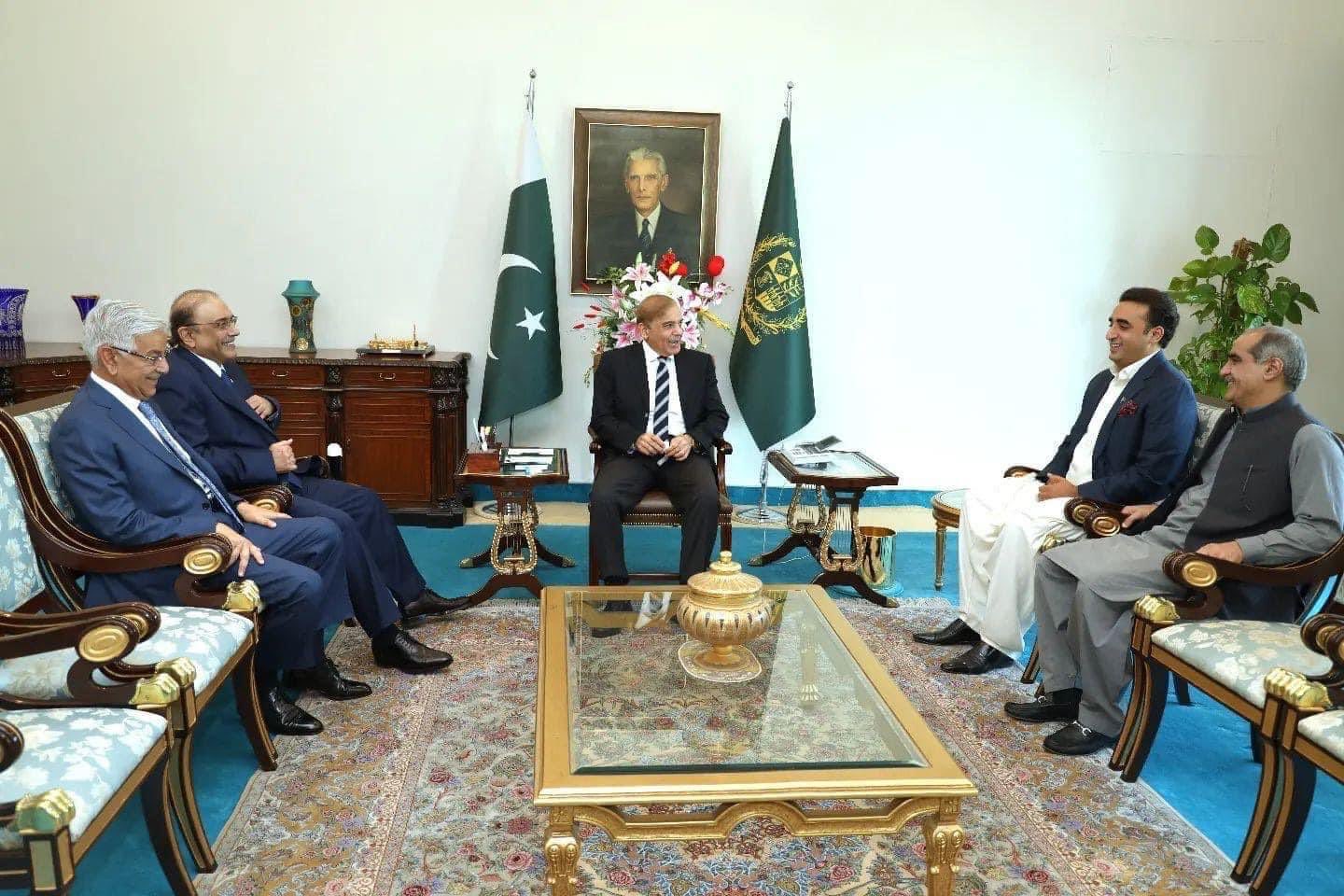 The 11 allied parties of the PDM government were forced to save the people from inflation.
The LNG that this government has purchased from Qatar for power generation will increase the price of electricity by Rs. 6 per unit.
It may be recalled that till 2018, the non-aligned government in its tenure had bought LNG from Qatar at a price of more than ڈالر 13 while the PTI government at a 30% cheaper price ie 10 10.
Both the buying countries are Pakistan
Qatar, the country that sells LNG
Then ? Or there may be a lack of seriousness in negotiation or commission.
Not frivolous
The imported government has less time and has three things to do.

1 have to close their cases

2 will return as much as you can in a few months.

3 will be expelled by making Pakistan the weakest.
And America will say that!
Operation accomplished
On the other hand, the imported government abolished the C-Pack authority as soon as it arrived.
We want the independence, sovereignty and economic security of our beloved homeland
The C-Pack Authority was set up because
1- All projects will be transparent

As soon as all the thieves got their names out of ECL overnight, as soon as they feel threatened, they will run away overnight and they will get NRO again. Billions of rupees have been spent overnight for the construction of dams.

It is good that the nation is now watching with their own eyes. Explosion is the first part of the American game has just begun. Let’s see what happens next.

The imported government is the American government. Our state institutions overthrew the people’s government and imposed the pro-Western government on 22 crore people who are leading the country towards civil war with the storm of inflation. 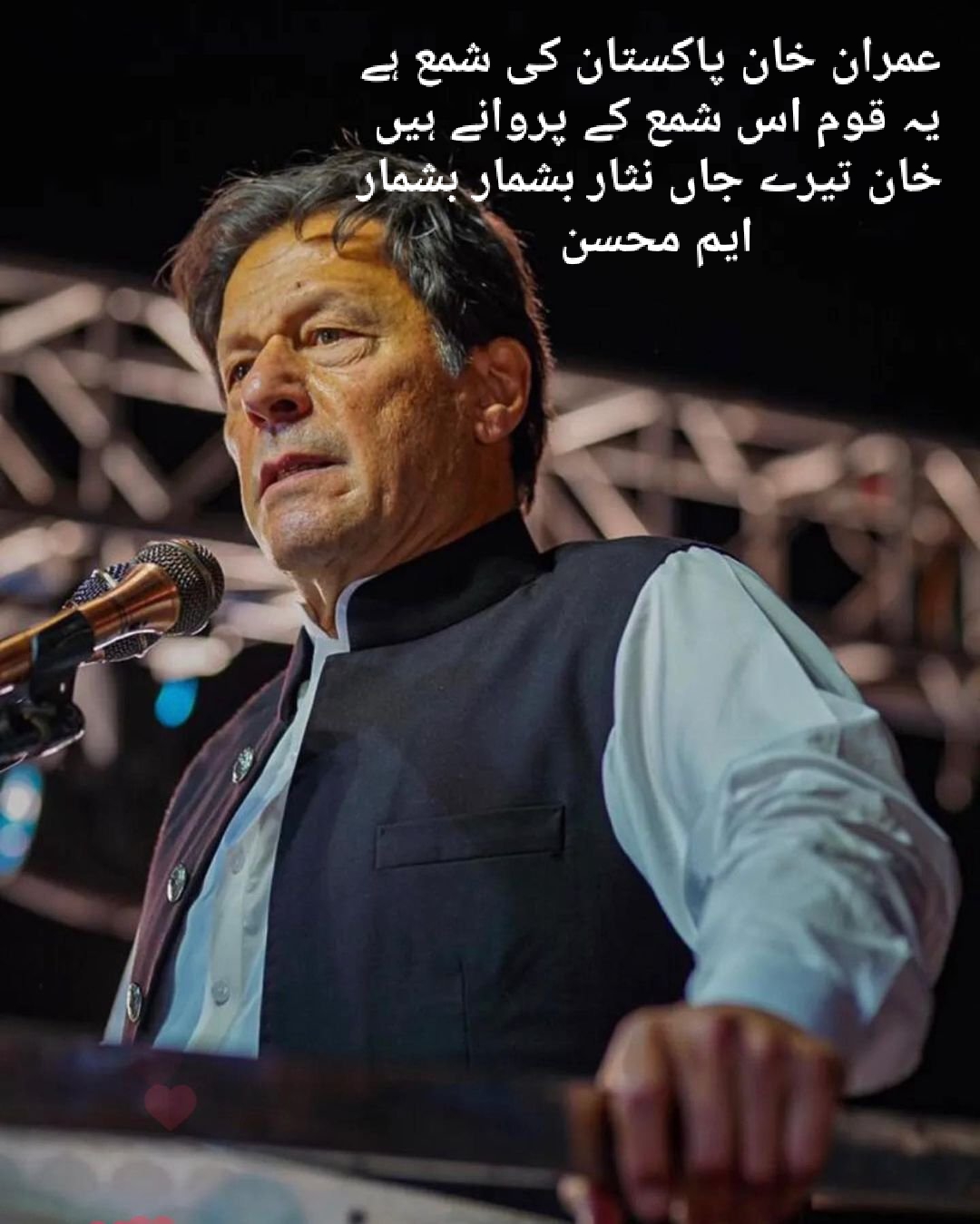 Addressing the Workers Convention in Lahore, Chairman Pakistan Tehreek-e-Insaf (PTI) and former Prime Minister Imran Khan said that he would go from city to city and prepare the people for the Islamabad March.

He said that this is the movement for the future of Pakistan. Not resting even on the day of Eid does not bring freedom. The nation has to fight for freedom. They want to see at least 2 million people in Islamabad.

Asking the media, the former Prime Minister said that where has the freedom of speech gone now? Has there ever been such a media blackout in our time? In our time, 80% of the programs on the media were against us. Who is threatening the media to blackout the PTI?

He said that we have been telling them that the foreign funding case should be heard by all the parties together. PTI is standing alone in the dock. Find something in funding and take action.

Shahbaz Sharif also had to admit in the national security meeting that the American post is true. Asif Zardari Shahbaz Sharif was part of the Three Stooges conspiracy.

I ask the courts and the Election Commission to take action against such a big conspiracy against Pakistan by holding hearings on a daily basis. 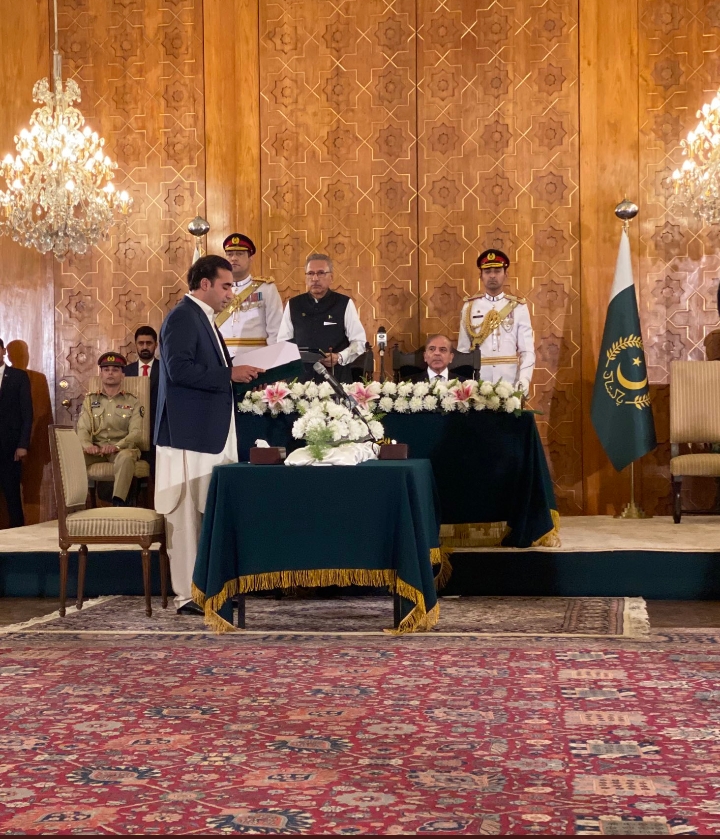 Hina Rabbani Khar is the Minister of State for External Affairs in the cabinet of PM Shahbaz Sharif. 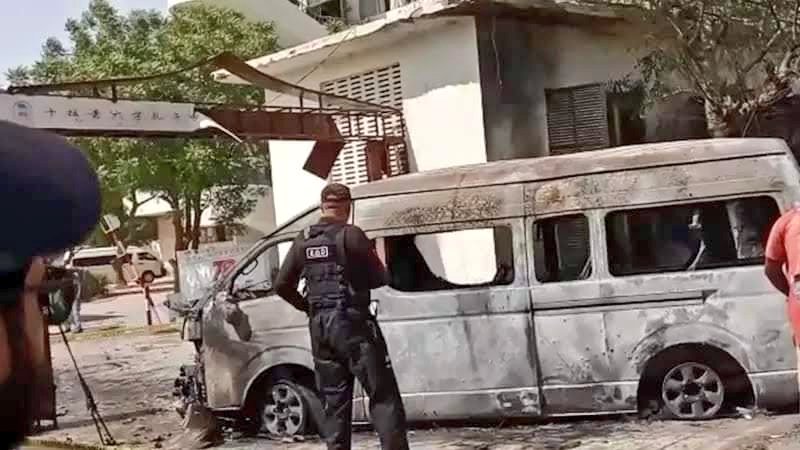 The claim was made in a preliminary report prepared by the Bomb Disposal Squad (BDS) on the suicide attack.

Sources said that ball bearings were also found at the site regarding the preliminary report prepared by the Bomb Disposal Squad.

BDS officials said in their report after a preliminary investigation that commercial explosives were used in the suicide bombing.

At least four people, including three Chinese teachers, were killed and several others injured in a suicide attack on a van at Karachi University.

A female bomber blew herself up at the gate of the Confucius Institute, which teaches Chinese language at Karachi University, just as it was about to enter the van of Chinese teachers.

The blast was so loud that its sound could be heard in the distance. The windows of nearby buildings shattered and panic spread among the people. The van caught fire, killing four people and injuring several other banned Baloch Liberation Army claimed responsibility for the attack. Dari accepted.

As soon as the incident was reported, Rangers police fire brigade and other rescue agencies rushed to the spot and shifted the bodies and injured to the hospital. The registrar of Karachi University said that three Chinese teachers and a van driver were killed in the blast. 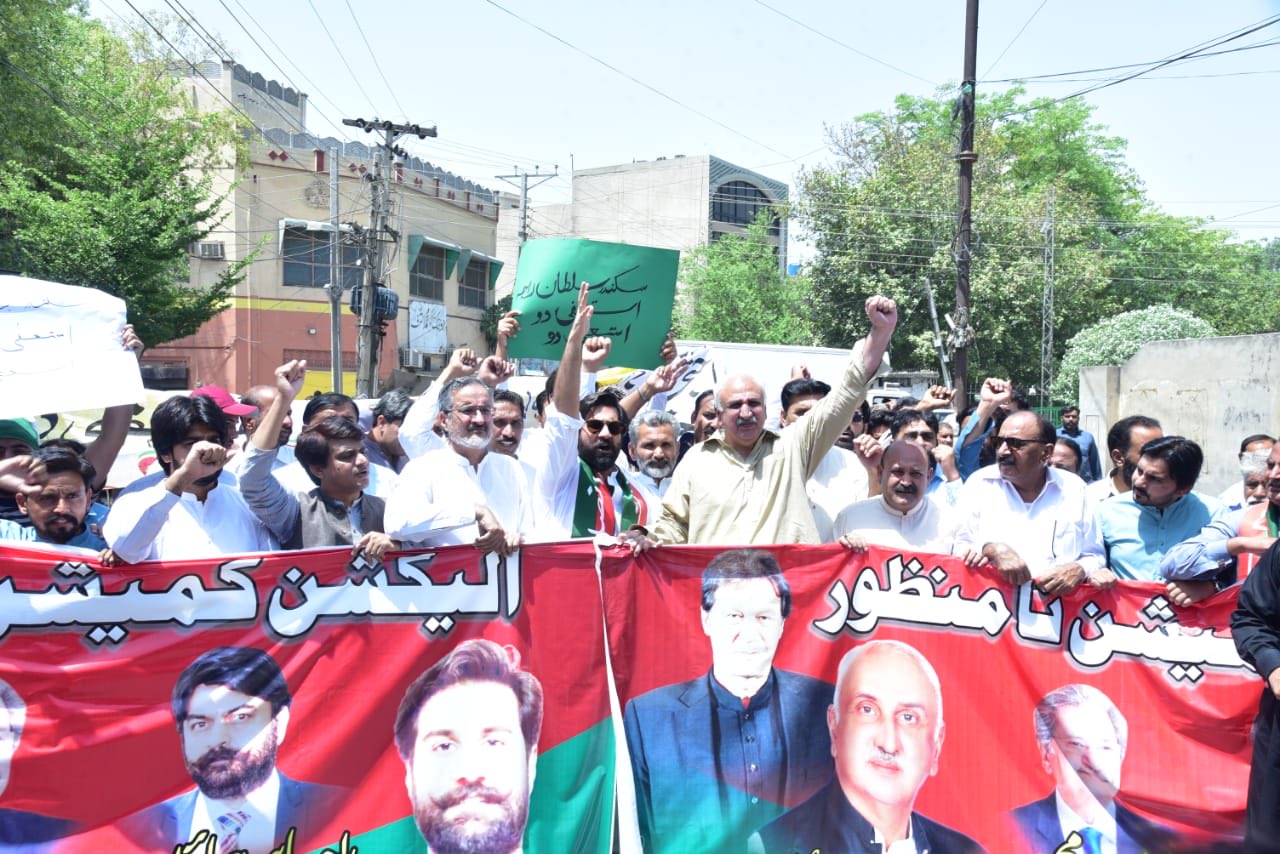 Pakistan Tehreek-e-Insaf (PTI) workers are protesting in front of Election Commission offices across the country. The imported government chanted slogans of disapproval.

PTI has decided to record a protest at Nadra Chowk in Islamabad while the administration has closed all the roads with barbed wire.

Demonstrators also staged a protest outside the Election Commission office in Lahore, organized by the PTI.

Addressing the protest, former provincial minister Mian Mahmood Al-Rasheed said that the deviant members should be immediately disqualified, while Dr. Yasmeen Rashid, who was present at the protest, accused the ECP of being biased and said that the biased attitude of the ECP was not acceptable to us. The Election Commission should take the nails of consciousness.

Senators Ejaz Chaudhry Jamshed Cheema and Musarat Jamshed Cheema said that PTI was being targeted in the foreign funding case and they wanted a transparent election and no buying and selling.

In Gujranwala, PTI workers staged a protest in front of the Regional Election Commissioner’s Office. In Sahiwal, a large number of workers, including local PTI leaders, took part in the protest.