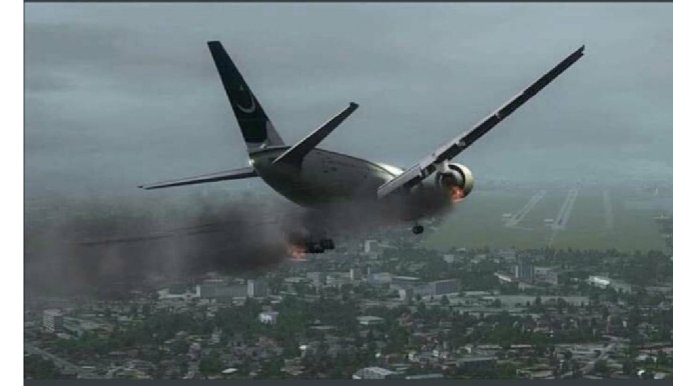 As soon as the plane crashed, a terrible fire broke out and smoke spread all over the area. Houses were damaged and vehicles were destroyed at the crash site.

According to reports, the plane crashed in an empty space. There were more than 100 passengers in the plane Airbus 320. The captain reported a malfunction in the aircraft’s landing gear to the control tower and the aircraft disappeared from radar while giving the captain guidelines.

A PIA spokesperson has confirmed the crash of Airbus 320 and PIA operational personnel have been called to duty. PIA CEO Air Marshal Arshad Malik has expressed deep sorrow over the sudden accident.

A PIA spokesman and civil aviation said the PIA plane had 99 passengers and eight crew members on board.

DIG Noman Siddiqui said that 4 houses were destroyed on the ground due to the crash. The crash site was cordoned off and sealed completely.

The bodies of 8 people and 10 injured in the plane crash have been shifted to the hospital.

An investigation is underway shortly before the crash landing, a PIA spokesman said
A PIA spokesman said the plane lost contact with the air controller at 2:37 a.m. A few minutes before the crash landing. Investigations are underway. There are speculations about a technical malfunction in the plane. Work has been started to contact the victims immediately.

The names of the pilots and crew members of the plane crash came to light
The pilot of Airbus 320 was Sajjad Gul and the first officer was Usman Azam while the crew members included Farid Ahmad Chaudhry Abdul Qayyum Ashraf Asma, Princess Madiha Iram Amna Irfan Malik Irfan.
There are reports of people in the houses being injured due to the plane crash. The injured are being evacuated from the affected houses.

There are reports of bodies and injured people being buried under the rubble at the crash site. Efforts are being made to rescue people.

Army chief expresses regret over PIA plane crash
Army Chief General Qamar Javed Bajwa expressed regret over the PIA plane crash and said that he was with the families of the passengers who died in this difficult time and directed the civil administration to cooperate for the relief work.