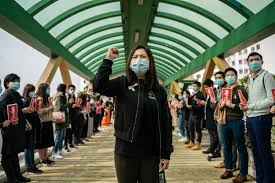 According to the details, the deadly quad-19 virus was first reported in China on December 31, 2019. The outbreak from Hubei quickly engulfed China. More than 80,000 people have been affected and more than 3,000 have been killed so far. Is . In order to prevent the spread of the deadly virus, three provinces were completely locked down in China, but now the outbreak has been overcome by China.

Of the 81 thousand confirmed cases, 69 thousand have returned to their homes in recovery.

In four days, the Corona virus center is slowly returning to normal in China. Activities are being restored by lifting travel restrictions in several cities. Artists have also expressed condolences over the defeat of the Coronavirus after the lockdown. People have also come out of their homes and life has changed again. Doctors have returned to their native areas.

No new local case of the Corona virus has emerged in China. Chinese authorities have confirmed that no new cases of Corona virus have been reported inside the country. Although 39 new cases emerged, they were all from outside China.

Which means that travelers coming from overseas when they were tested in China confirmed the virus. The number of deaths in China has also dropped significantly, with only 3 new deaths reported. Now the country’s focus is on controlling the spread of the virus, namely restricting the movement of people coming from abroad. According to international observers, the reduction of deadly virus cases in China is due to the stringent measures taken by China, including the complete shutdown of cities and provinces.

The World Health Organization described the arrival of new cases in Wuhan, China’s former stronghold, as “hope for the world”. However, the number of deaths in Italy in one day rose to the highest level ever. Have arrived

It should be noted that the Corona virus has engulfed 185 countries globally and so far the number of Corona virus deaths has increased to more than 12,000 while millions have been affected by it. In Italy, Spain, France, Germany and Sweden are seeing a rapid increase in corona virus cases.