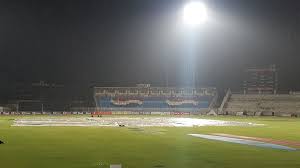 Lahore: Due to rain, the 25th match of the Pakistan Super League (PSL) between Multan Sultans and Quetta Gladiators was canceled.

The Multan Sultans are currently leading the table with 12 points, while Quetta Gladiators are at last with 7 points.
Lahore Qalandar defeated Peshawar Zalmi by 5 wickets at the Gaddafi Stadium yesterday.
Remember that for the first time all Pakistan Super League matches are being played in Pakistan. A total of 34 matches will be played in 32 days in the PSL event. Out of which 14 matches will be in Lahore, 9 in Karachi, 8 in Rawalpindi and 3 in Multan. Pakistan Super League final will be played on March 22 at Gaddafi Stadium Lahore.