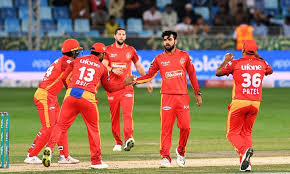 Among other players from Multan, Zeeshan Ashraf scored 50 runs, Shahid Afridi 11, Moin Ali 10, Khushal Shah 7 runs out while Russo did not score any runs and returned to the pavilion. Multan Sultans scored 164 runs in all overs and gave the opposing team a 165-run victory. Emaid Butt got four wickets for Islamabad United. One, one player out.
In pursuit of the target, Islamabad’s Luke Ronak and Colin Munro started the innings. Runner and Colin Monroe, playing aggressively for Islamabad, completed the half-century of the team in the fifth over and scored 92 runs in the first wicket partnership.

Colin Monroe struck out 50 with 32 balls to spare. Newcomer David Milan supported the runner, but the runner came very close to the victory and lost his wicket and went back to 74 for 45 balls. ۔ However, David Milan remained unbeaten on 35, while Colin Ingram finished the match with one run, and thus Islamabad United took the match by 8 wickets. Multan Shahid Afridi and Mohammad Elias were dismissed for one each.