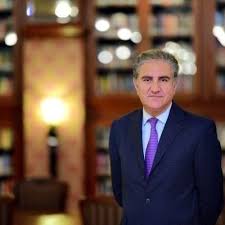 KARACHI: Federal Minister for Foreign Affairs Shah Mehmood Qureshi has said that the world knows what is happening in Kashmir, India can prevent a drama like Paloma.
Speaking at the Federation House in Karachi, Foreign Minister Shah Mehmood Qureshi said that I had brought a written speech but what you said and the problems you mentioned should be openly discussed. The Foreign Minister said that he was going to sign an agricultural research agreement with China. Which will help improve our productivity. He said the FTA could increase the chances of exporting textile sugar potatoes.
External Affairs Minister said that we have been working to promote trade with Bahrain and Qatar. In the first pack, Focus Energy was, but now our priorities in the new SeaPac Phase Two agreement are industrialization. He said that Pakistanis abroad send $ 30 billion annually, which is very important to us and we can never forget it.
Foreign Minister Shah Mahmood Qureshi while talking to the industrialists at Karachi Federation House said that economic diplomacy is my priority, the doors of the Foreign Ministry are open and traders should come and partner. Recognizing the improvement in the situation, Britain is looking for new markets after Brexit that Pakistan can deliver. He said the UK has restored its airline and softened travel advisory. Pakistani forces have improved security by offering sacrifices.
Meanwhile, Foreign Minister Shah Mahmood Qureshi while talking about Kashmir criticized the policies of the Modi government and said that India had removed the funeral of the occupied Kashmir economy. He said the measures in occupied Kashmir have caused a loss of $ 2 billion.