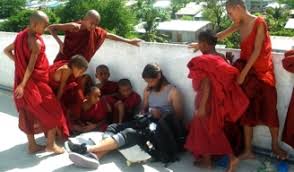 Burmese was the name of the country sending 4750 tonnes of rice to overcome food shortages. Mosques will be closed Qur’an has banned Taraweeh.
The screams of the oppressed Muslim of Rongni are echoing throughout Islam. The earth is shaking. The land of the Rohingyas is in the blood. No longer water in the rivers canals of the Burma Rongis, innocent children, young men and women are bleeding from the elderly. The tragedy of the tragedy is being separated from each of the Muslim organs. Innocent children are being thrown into the burning flames of the victims. More than 12,000 Muslims were killed. Buddhist terrorists seized their jobs and their homes. What are the perpetrators of these oppressors? The Rohingya oppression on Muslims has started from 2012 and continues till now. To this day, the Buddhist terrorists have neither recognized nor recognized the rights of the Rongi Muslims. Torture on the innocent is not brave. Remember the unjust unbelievers, God’s wrath will soon come upon you. The blood of the innocent will not pass through. Watching video pictures of these atrocities on social media makes the heart cry. I think the Muslims of Rongni are helpless. But for what reason do all Islamic countries continue to be helpless, Palestinians remain silent spectators on Syria. Everybody in Pakistan is worried about the cruelty of the Rohingya. Unable to do anything at.

The Rohingyas are suffering from the atrocities of Palestine Kashmir and the innocent Muslims of Syria for many decades. To date, Arab countries have not taken any concrete steps in support of them. The Arabs have no opportunity with their luxuries. Arab countries are dancing on signs of self-determination. Look at the so-called Contracting Nations of the world justice. To this day, the Kashmir-Palestinian nation could not solve the Syrian issue. There seems to be no hope of that happening. Remember that the United Nations is the product of blasphemy, and that the Court of International Justice has always ruled in favor of the Jewish lobby.

The infidel lobbies are fully supportive of their oppressors. As usual, the silence of the OIC Unit Nation and the global community on the genocide of Muslims is proof of this. And let’s see the tragedy over the tragedy – the Islamic NATO formed on the military of 34 Islamic allied countries, headed by former retired general Raheel Sharif. This Islamic NATO is also watching the cruelty of cruelty on the Rongis sitting silent. Saudi Arabia has been formed by this Islamic NATO. And the Saudi Arabian Arab Emirates has always favored the Jewish lobby.

The people who are barking on social media to send pangs to the Pak army. They are just laughing and reading about how much help Pakistan has provided to the affected Muslims since its establishment. So far, no Islamic countries have done so. Since the mid-80’s, three million affected Burmese have been living in peace in Pakistan. More than that, in the war of the Soviet Union, Pakistan considered its brotherly country a safe haven for Afghans. Whose loss we continue to bear. Turkey is the only country that is suffering after Pakistan. Which is the yearning for the most oppressed Muslims of Rohingya. But he too is helpless. Turkey made the painstaking decision of the Bangladeshi government to take all their expenses to shelter the Muslim of Rongyi. But India’s pro-Bangladeshi Kali Mata Hasina Wajid has closed her borders for the victims of Rongi. Where do 28 million Muslims of India and 16 million Muslims of Bangladesh die? And what are these Arab countries made for oilseeds for oil production? They are then built to protect Arab royal families. Or this Islamic NATO will continue to see the same spectacle of the destruction of the oppressed Muslim.

The United Arab Emirates, which has bought trillions of dollars of advanced jet fighters from global powers, will do so. What is the disease of Islamic NATO is the medicine made in all these Islamic countries. This Islamic NATO will also follow in the footsteps. It is also the purpose of the rehabilitation of the Rohingyas. Why is everyone’s fingers on the Pak Army? Why should the Pak army go to Burma? Brother Pak Army has taken the contract of everyone. Why those who are criticizing the Pak army on social media do not go out themselves to help the Muslims of Rongni. If you can’t go, you can at least help the Muslims of Rongi. Who are calling for help in crossing the river of death into the camps in Bangladesh. They are waiting for our help to help our innocent brothers and sisters.

Brothers, you can pray more and more in favor of the isolation of nights in the prayer of Allah for the protection of the oppressed of the Rongis and the destruction of the atonement for the elimination of oppression. We can do the relief work of the victims of Rongi. Raise your voice against cruelty.